All posts in Blog

Find what you love and let it kill you.

My dear,
Find what you love and let it kill you.
Let it drain you of your all. Let it cling onto your back and weigh you down into eventual nothingness.
Let it kill you and let it devour your remains.
For all things will kill you, both slowly and fastly, but it’s much better to be killed by a lover.
~ Falsely yours
Charles Bukowski

When people say, “You’re thinking too big”, be smart enough not to listen…

When people say, “You’re thinking too big”, be smart enough not to listen. And when they ask, “How can you do that?” Look them in the eyes and say, “I’ll figure it out.”
Eric Schmidt

Whatever can happen, will happen…

Whatever can happen, will happen…
Augustus (Murphy) De Morgan

I am tormented with an everlasting itch for things remote. I love to sail forbidden seas…

As for me, I am tormented with an everlasting itch for things remote. I love to sail forbidden seas…
Herman Melville, Moby-Dick

Visions without execution are hallucinations. Air transportation has always been a domain of interesting and complex problems in terms of operation management. It involves numerous uncertainties from planning to implementation, while requiring long resource planing and scheduling horizon.

While you can buy a ticket conveniently with couple clicks, there is an incredible e-commerce infrastructure with parallel processing capability (simultaneous ticketing for a spot from numerous agencies), fleet management (harmonization of airplanes for the highest efficiency) and numerous other logistics solutions such as crew management and airport/gate/check-in planning in the back-end. Further uncertainty is induced by the break down/maintenance and unexpected delays.

The situation is similar for the capacity planning and pricing of such a complex system. The flexible ticketing options emerged by the demands of the customers induce further uncertainties. In the world of production and service systems, uncertainties have a significant consequence: MORE COST. More costs reflect as higher prices to the consumers. Simply put, the extra capacity needed because of the uncertainties is compensated by the customer – in the lack of competition-.

In this case, competition is an important catalyst for the airlines to develop new ways to cope with  and compensate the uncertainties as the profit margins are shrinking (such as overbooking). An article in New York Times illustrates how extra we are actually paying and how significant the impact of competition is. 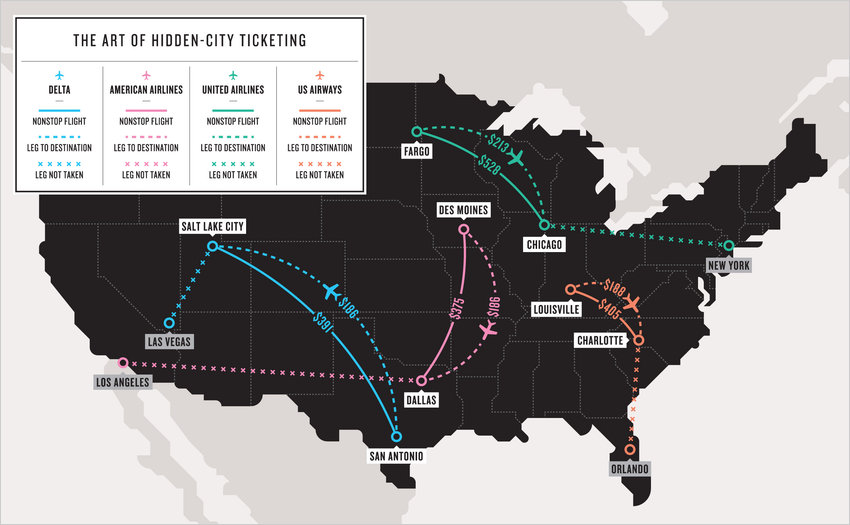 If the figure is analyzed, tickets to hub-cities dominated by a carrier, where the competition is weak, are extremely expensive. In fact so expensive, that if a connecting flight is added to a destination city with a more competitive market, the prices go down. For example Fargo – Chicago flight costs $528, whereas Fargo – Chicago – New York flight costs $213. Unbelievable isn’t it?

In conclusion, if you buy a ticket for Fargo – Chicago – New York and don’t take the connection flight, you can get the half price for Fargo – Chicago ticket. This situation is not apparent in Turkish Airlines domestic pricing, but for international flights, where the market is much more competitive, this is a viable strategy to consider. At the same time this type of inconsistencies, which seem irrational for the customer obviously affect the trust and loyalty of the customer.